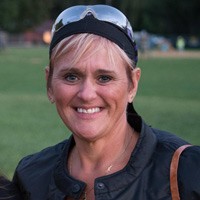 The delivery person who was in the victim's neighborhood the afternoon of the murder agreed to work with investigators to try to remember more about that day.