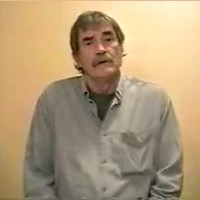 The detectives asked Johnny McPhail to provide some more information about Missy's relationships.

Detectives Armstrong and Murphy re-interviewed him at the Yoknapatawpha County Sheriff's Department.

Detective Armstrong: Thanks for your time again, Johnny.

Detective Armstrong: So let's have your name and address.

Detective Armstrong: OK. We've just got some follow-up questions for you now. First of all, tell us more about Missy's relationship with Steve Kirby.

Johnny McPhail: You mean when they were kids or recently?

Detective Armstrong: Recently. At the time of her death.

Johnny McPhail: I think I told y'all most everything about it earlier. They talked. I think he was a little unhappy with his marriage, and he turned to Missy.

Detective Murphy: In our earlier conversation, you seemed to feel like there wasn't much to Steve and Missy's relationship. Do you still feel that way?

Johnny McPhail: Shoot, I don't know what to think. I pondered on it a bit, and there might be more than what I let on last time. After we talked, I got to thinking 'bout what all Missy had said. And maybe they were leaning towards more of a romance type thing than just friendship.

Detective Murphy: Were they sexually involved?

Johnny McPhail: Lord, I don't know about that. He probably wanted to be, but I think Missy was pretty tore up about which way to go. But at the same time, I'm not no mind reader, so I don't really know what he wanted.

Detective Armstrong: Do you know if Steve ever talked about leaving his wife if Missy would take him back?

Johnny McPhail: Once again, I don't know much of anything. I don't have any facts. But if you're asking me to give my opinion based on all the stuff Missy told me, then yeah, he probably would've left his wife if Missy wanted him.

Detective Armstrong: And what did Missy think?

Johnny McPhail: I told you. She was right upset about the whole thing. I'm sure there were feelings for Steve, feelings for the fact that he was the only man who ever treated her good. But at the same time, he's married and all that. So I never got a real answer from her one way or the other.

Detective Murphy: What about the paternity issue? There seems to be some question as to who Liddie's father is. What do you know about Steve's thoughts on this?

Johnny McPhail: I don't have the slightest. Missy hinted around that Roger might not be Liddie's daddy, which would point to Steve, but she never said anything specific. I think she just didn't want to deal with it. I can tell you that I don't think Missy really knew a hundred percent who the father was. But I don't have no way of knowing what Steve's take on the whole thing was.

Detective Murphy: What did Missy think about the whole paternity test issue?

Johnny McPhail: She just didn't know what to do. I mean, she wanted to know who the father was, but at the same time, what if it did turn out to be Steve? How would Liddie handle it if her daddy turned out not to be her daddy? And how much of an uproar would that cause in Missy's life too? And Steve's?

Detective Armstrong: Seems like Missy was pretty conflicted about a lot of stuff.

Johnny McPhail: Yeah, we talked about that last time. That's part of what caused so much pain in her life. She never could just make up her mind.

Detective Armstrong: Do you know what Missy's decision was? Did she want to have the test or not?

Johnny McPhail: Nah, I don't know. She never did tell me, but I think she was leaning towards doing it. Just needed to work up the nerve for it.

Detective Murphy: Back to Steve Kirby. You mentioned before how tough it was on him, losing Missy. How do you think he would have felt to come close to her again but not get there? What if she declined his offer to get back together?

Johnny McPhail: Come on, Sam. I don't know what he would've done. I expect he would have been right upset about it. Why don't you ask him?

Detective Murphy: You know us. We'll definitely ask him. I'm just trying to find out Missy's opinions on things.

Johnny McPhail: Yeah, it's tough. Me and Missy talked about a lot of things, but she rarely just came right out and said anything. Usually, it took her a while, and then we'd finally get to the heart of the talk. So it's hard to give you any specific statements she made.

Detective Murphy: What do you know about Steve's wife, Maureen?

Johnny McPhail: Don't know much about her 'cept for the fact that she's jealous as all get out. She went down to the beauty parlor and raised all this ruckus about Missy and Steve.

Detective Murphy: What did Missy say about it?

Johnny McPhail: Just that it was right embarrassing. She was pretty upset about it. Maureen coming in and making all those accusations. Missy said that she was real cold. Not angry like being out of control, just vicious.

Johnny McPhail: Yeah, I think she was. I mean, Missy's been around some fairly rough men, and they ain't always treated her so good, so she wasn't a stranger to fights and stuff. But, yeah, I think she was a little scared of Maureen. She just kept talking about how cold Maureen seemed. Even though there was a lot of anger and rage, she just seemed so cold and mean. I don't think that Missy let on to anyone else about that, but I believe she was scared. I think Maureen must've said something to her that she didn't even tell me about. Can't say why I think so really. Just my impression, I reckon.

Detective Armstrong: Did Missy have any reason to be scared of anyone else? What about JP?

Johnny McPhail: I think she was a little worried about him, the punk. But, he was sort of "the devil you know." She knew he could get rough, but she was used to him. One of these days, someone is gonna bust his head. And I'd love to see it. I guess to answer your question, she was wary of JP. You never know with someone like him.

Detective Armstrong: And what about Roger? Was she scared of him?

Johnny McPhail: Not in the way you mean, I don't think. She was more scared of him actin' up and how that might affect Liddie. But I don't think she was scared he would hurt her. Not that she told me about.

Detective Murphy: Missy called you on the evening before she died, and y'all talked for almost 15 minutes. Do you remember what that conversation was about?

Johnny McPhail: Nothing in particular that I can recall. Probably about how her day was, how Liddie was doing, things like that. I'm sorry, but I just can't remember the details.

Detective Murphy: That was the last time you spoke with her, right?

Johnny McPhail: I believe so, but we talked so often, it's hard to remember what was said in each conversation. I can think on it some more and give you a call if I remember anything.

Detective Murphy: We'd appreciate that, Johnny. I think that's all we have for you right now. Thanks again for coming in. We'll let you know if we need anything else.