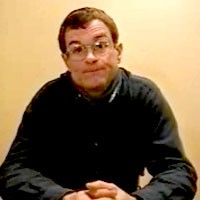 Roger Hammond was once married to the victim, Missy Hammond.

At Detectives Armstrong and Murphy's request, he came into the Yoknapatawpha County Sheriff's Department for another interview.

He was accompanied by his attorney, Glenn Jones.

Detective Murphy: Thanks for coming back down to speak with us again.

Detective Armstrong: Getting a little nervous there, Roger? Bringing in your attorney and all.

Glenn Jones: With you in the picture, I wish Roger had included me earlier. I'm warning you, Armstrong, I'm not going to let you berate and badger my client.

Detective Murphy: OK. This can be really easy if you let it. We'll just get right to it. Did you murder Missy Hammond?

Detective Armstrong: Go ahead and admit it, Roger. We've got more than enough evidence to convict you.

Roger Hammond: What evidence do you have?

Detective Murphy: Admit that you did it, and we'll tell you.

Glenn Jones: He'll admit nothing of the sort. If you've got something to say or evidence to produce, then do so. But quit baiting my client.

Detective Armstrong: You know what, Jones? We'll make you a deal. If your client can give us an alibi for the time of Missy's murder — one that can actually be verified instead of this flimflam he's been feeding us so far — we'll drop the whole thing and we can all go home.

Glenn Jones: Roger has already told you where he was, and at some risk to himself may I point out, since it was in violation of the custody order.

Detective Armstrong: Well, there's a problem. We can't get anyone to corroborate exactly where he was from, oh say, 3:30, 3:45 until sometime around 4:30 or 5:00. His co-workers say he wasn't at Farrell Motors. His own parents say he wasn't with them. So where were you, Roger?

Glenn Jones: My client has already given you his alibi. If you can't verify it, that's your problem.

Detective Murphy: OK, how about this. You remember when we searched your house, right Roger? Well, one of the things we removed was a piece of rope. It was tied around a box in your storage room. Remember it? It's Evidence #000524-47 in case you're interested, Counselor. It just so happens that your rope is consistent with the ligature marks on Missy's neck.

Glenn Jones: There are any number of explanations. Common types of rope often leave similar markings. It's just bad luck that the rope he had in his house is similar to that used by the killer.

Detective Armstrong: And is it also just bad luck that same piece of rope found in Roger's house had a few links of gold in it? 14-carat gold that's consistent with a necklace Missy used to wear every day. The necklace that Missy's beloved daughter saved her allowance to buy. The necklace that has been missing since her death.

Roger Hammond: Glenn, this is stupid. I don't have to sit here and listen to this, do I?

Glenn Jones: No, you don't. Detectives, I'm warning you both. You'd better behave yourselves or else this interview is over. If you think you've got enough to charge my client, then you should do it. As it stands right now, I don't see how you've got very much.

Detective Armstrong: How about the fact that Missy's fingernail fragment was found in a vacuum cleaner filter from the Farrell Motors car dealership?

Detective Murphy: When Missy's body was examined, there were some fingernails missing. Like she had broken them off when she was struggling with her attacker. We found one of them in a filter from your dealership.

Roger Hammond: That's impossible! Why I—

Glenn Jones: Once again, Detective, that could be simply a coincidence. Or it could be the killer is trying to frame Roger.

Detective Armstrong: He's doing a damn good job of it, if you ask me. You doing all right there, Roger? You're not looking so good.

Roger Hammond: Can I have some water?

Glenn Jones: You wouldn't look so good either, Detective, if you were being treated this way.

Roger Hammond: It's– it's just that I—

Glenn Jones: Had nothing to do with Missy's death. And that's all there is to it.

Detective Murphy: Let's just have the truth, Roger. This can all be over with fairly quickly.

Glenn Jones: Quit begging my client. He's not going to confess to something just so your workday can be a little shorter.

Detective Armstrong: Why don't you just clam up over there for a minute, and let us get through this?

Glenn Jones: See that's just the kind of attitude that—

Detective Murphy: Gentlemen! Now, Roger. You know what else we found out from Missy's fingernails? The DNA analysis of the trace amounts of skin under her nails didn't exclude you. It excluded Steve Kirby. And it excluded Kevin Travers. And it pretty well excluded JP Wallace. But not you. And there's other stuff—

Glenn Jones: This is all very interesting, but none of it—

Detective Murphy: Why did we find your hair in Missy's house, Roger?

Glenn Jones: He doesn't have to explain it.

Detective Murphy: Roger, you know that we had paternity tests performed on Liddie.

Roger Hammond: Yes. And if that damn Steve Kirby thinks he's going to take my daughter—

Detective Murphy: Relax, Roger. You're the father. The tests reveal that you are, in fact, Liddie's father.

Roger Hammond: I am? Thank god. I always knew she was my little girl.

Detective Armstrong: Yup. Too bad that you won't be able to see her from jail. Did we mention that stains on some your clothing that we took into evidence from your house matched the wine we found in Missy's house and the wine that was spilled on Missy's rug?

Roger Hammond: Jail? Oh my god… Jesus, why do I always mess up?

Detective Armstrong: Mess up how? By killing Missy when you didn't have to?

Glenn Jones: Detectives, this interview is over—

Roger Hammond: Why? I was her father all along—

Detective Murphy: Waited for what?

Roger Hammond: Ohhh. What is Mama going to say?

Detective Murphy: Come on, Roger, quit babbling. Talk to us. Make some sense, and we'll try to help you.

Glenn Jones: No, he will not talk to you! Roger, don't say another word.

Roger Hammond: But– but why did I—

Glenn Jones: Dammit, Roger! This interview is over!

Detective Murphy: That's OK, Glenn. We don't need any more. The officers will meet you outside to take your client into custody.