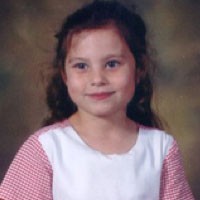 DOB: 12/12/93
Occupation: Student
Hometown: Oxford, MS
Relationship to case: Victim's daughter
Excerpt: "Liddie still believes to this day that if she had been more of a good girl, they would…"

Lydia Rachel Hammond was born on December 12, 1993, to Missy and Roger Hammond in Oxford, Mississippi. Liddie was a happy baby, despite the fact that her parents, both teenagers, frequently found the task of parenthood difficult at best.

Of above-average intelligence, Liddie excels in school and especially likes math, science and art. She wants to be a "pet doctor," as she calls it, and make all the sick animals well. She has always been an outgoing and friendly child, frequently carrying on conversations with adults she met on buses and in the hair salon where her mother works.

Liddie's parents divorced when she was four, and there was a distinct change in attitude in behavior that worried both her parents. She became quiet and depressed when her father moved out of the family house and she and her mother moved to a newer, smaller home.

Secretly, Liddie believed her parents divorced because she had done something bad. Despite her mother's assurances that she had nothing to do with it, Liddie still believes to this day that if she had been more of a good girl, they would still be together as a family.

She adores both her parents, her Grandpa Jonah who frequently takes her fishing and tries to teach her the finer techniques of bowling, and her Papa Thomas and Mama Gloria who spend time with her every Friday.

Liddie has two pet turtles, "Duck" and "Hide," and hopes to get a kitten when she is old enough to take care of one. Her favorite things are playing dress up with her mom, roller skating and eating pizza.